80 years after. Barcelona remembers bombing of 1938

The bombing of Barcelona. What happened in 1939?

The Bombing of Barcelona was a series of Nationalist airstrikes which took place from 16 to 18 March 1938, during the Spanish Civil War. Up to 1,300 people were killed and at least 2,000 wounded.

In March 1938, the Nationalists started an offensive towards Barcelona.On 15 March, the French government reopened the Spanish frontier and Russian supplies began to pass to Barcelona. With this Mussolini decided to carry out massive air bombings against Barcelona in order to “weaken the morale of the Reds”. Mussolini thought that aircraft could win a war with terror.

Between 16 and 18 March 1938, Barcelona was bombed by bombers of the Italian Air Force flying from Mallorca with Spanish markings. The first raid came at 10:00 of 16th March. After that, there were 17 air raids by the Italian bombers at three hour intervals until 03:00 in the morning of 18 March. Most of the bombing was in the central areas of the city, especially the Gothic Quarter. Barcelona had little anti-aircraft artillery and no fighter cover. The Spanish Republican Air Force didn’t send fighters to Barcelona until the morning of 17 March.

The bombers glided in at high altitude to avoid being detected by the (pre-radar) acoustic aircraft detection means available, and only restarted their engines after releasing their bomb loads, termed the “silent approach” method. The effect of this was that the aircraft were not detected and the alert only sounded until after their bombs had exploded on target, having a demoralizing effect on the civilian population, which suffered prolonged anxiety quite out of proportion to the number of bombs dropped over the period of time.

The horror of the civilian population

Coupled with the fact that there was little discernible military value in the choice of targets within the city, and the cessation of the attacks for no apparent reason, it was determined that the raids constituted a deliberate experiment in the use of such tactics in preparation for their application in any subsequent conflict by the Germans and Italians against other European countries.

The repeated wave of attacks carried out by the Italians would render irrelevant the air-raid alarm system since it would no longer be clear if the sirens were announcing the beginning or the end of an attack. Furthermore, they used delayed-fuse bombs designed to pass through roofs and then explode inside the building and a new type of bomb which exploded with a strong lateral force, so as to destroy anything within a few inches of the ground.

The bombing of Barcelona affected all the city and the bombers didn’t attempt to destroy military targets. On the night of 18th the working class districts were badly hit. The Italian bombers dropped 44 tons of bombs, and there were more than 1,000 civilians dead.

The attack was condemned by Western democracies all around the world. And on 19 March, Franco asked for the suspension of the bombings, for fear of “complications abroad”.

Barcelona has never forgotten those terrible events. The memory of the airstrikes and the terrible toll the city suffered is still alive. This year, a commemoration for the eightieth anniversary of the bombings was organized by the City Hall and the Commission of Memorial Programs. A visual 3D installation will be on display from the 16th to the 18th of March on the facade of the City Hall palace in Plaça Sant Jaume.

Designed by artist Xavi Bové, it will represent a tree, with a show of lights on the wall and sounds in the background. According to the artist and the Centro di Studi sul Cinema Italiano (Centre for Italian Cinema Studies), who supported and helped the initiative, the tree is an abstract representation of the people that had to suffer the bombings. It avoids the representation of direct violence by not showing direct references to violence and suffering. A more positive and gentle approach to preserve the memory of those terrible moments. 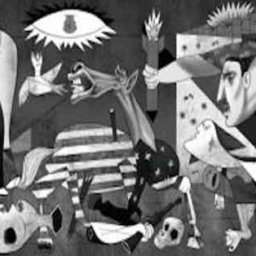 Guernica, the horror of the Spanish Civil War in Picasso’s masterpiece
12 Sep 2017